Come fly with Emily as she whisks you away high in the sky.

Bitter rivals with Amelia Earhart (Don’t mention her) Emily dreamed of being the first boob-endowed aviator to cross the Atlantic single handed. After a slight detour, throttle issues, running out of gin and crashing in the sea in a big ball of flames. She came to with an immense hangover on an island somewhere in South America.

That was 1936. If you think she looks good for her age. Tell her. She might just teach you the secret of eternal youth and beauty. Get your hips at the ready, they are going to thrust like they’ve never thrusted before!

If you really want your night to take off, don’t hesitate to book Emily.

Don’t just take my word for it though. Here’s some glowing praise, from some of her past passengers:

“Emily Flasheart [sic] for PM! This lady rocked our world, brilliant characterisation, lovely person, super talented actress and just generally the coolest cat! She made a fab experience an unforgettable one. In fact, Emily should come on every outing we have from here on in! She was awesome!” KellyLeonard1979 – Reviewed 25 August 2017

“Emily Flairheart (woof!). Emily was brilliant, and kept up a ludicrous amount of energy and humour” Helm2108 – Reviewed 11 February 2018

“Our host Emily was excellent and very entertaining throughout and always kept the tempo fast and excitement at the highest levels.” Duststorm – Reviewed 17 June 2017

The secret to eternal youth you say?

Who’s a pretty girl then? Definitely not Polly!

A colourful outfit, with colourful language to match. Spewing pieces of hate from her beak and certain to ruffle a few feathers.

Polly has been a hit on the high seas with P&O. Feathering her nest at Bonkers Bingo.

Being a true parrot she’s an excellent mimic and a songbird.

This is definitely a bird you want to keep in the hand.

Embrace the call of the wild and give her a ring, or a tweet would be more appropriate. Book Polly.

Some kind words for Polly:

From, Life Styled By Jennie: “…The hostess for both evenings, who may I add is absolutely brilliant!!!, shouts out the numbers and  often the game is interrupted with song singing, dance offs and other random entertainment. She’s brilliantly witty, and without her the game would only be bonkers, not hilariously fun. I spent both night crying with laughter…”

From, Crunch Corner: “…There’s a pre-warning for those that are prude and easily offended and are told to ‘f**k off’ for this game will offend. The room burst into laughter and everyone stayed put. After several numbers, a corker of a tune will come on, where you’ll sing, dance or sway with your phone light flashing side to side. Expect the unexpected. Our bonkers host was the ultimate ringleader, she strutted her stuff, sassed it out, and completely entertained. She was on fire. And as feisty as her attitude was, were the bingo phrases that rolled off her tongue…” 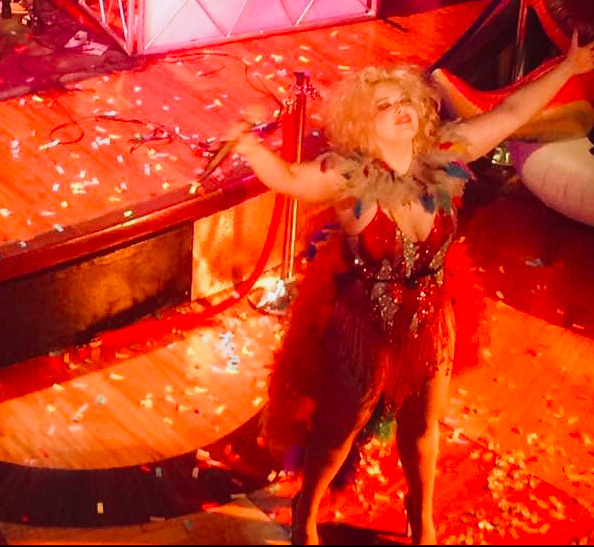 Who’s a petty girl then?